A huge event with the above title occurred in Christchurch tonight.  Around 400 people packed into the sports bar at the Woolston Club to hear views on the rebuilding of Christchurch following the 4 September earthquake. 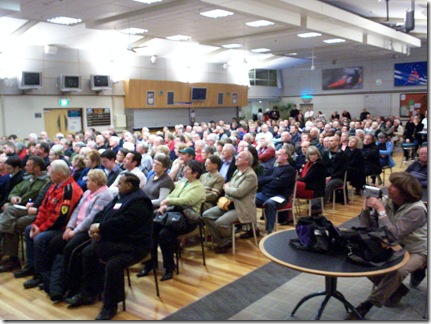 In recent days the Mayor, the government and Civil Defence have all been guilty of making haste at the expense of the involvement of the people of our city.

The Mayor has unilaterally appointed Wellington architect Ian Athfield to advise the city on reconstruction.  No city councillors were consulted in this decision.

The government is pushing emergency legislation through parliament to “cut paperwork” for reconstruction.  Basically reconstruction activities will be allowed to by-pass the usual checks and balances that are placed on construction and development.  Of course, there is some value in this; we don’t want to get bogged down in making our city liveable again.  But only quick-thinking intervention by opposition MPs gives any chance of the recognition of heritage values and sustainability considerations being included in this legislation.

Civil Defence and the Mayor have combined to authorise the demolition of many historic and much-loved buildings that, with a few days of reflection and assessment, could well have been saved.

While the Mayor continues his long-standing practice of springing surprise announcements on the city, the People’s Choice team organised a panel of expert speakers to inform the crowd and stimulate public debate.

Dr Pilar Villamor gave us a rundown on relevant earthquake science.  We are living on a fault line.  No one knew it existed before 5 September.

Professor Elms praised the very basic engineering work that had saved many heritage buildings, such as those in the Arts Centre precinct.  Using common sense and dead reckoning, without the use of complex engineering calculations, strengthening work since the 1970s saved many buildings from major damage.

Professor Elms urged that we not be in a hurry, that we should take the time to make considered decisions regarding the future of city buildings.  He also recommended that we make our decisions with a view to the city as a whole, rather than individual buildings in isolation.  Naturally, all decisions would be a balancing of economic and aesthetic values.  He called for a “lightness of touch” in our approach.

David Sheppard invited us to reflect on the fact that Christchurch would now be labelled “earthquake prone”; a label we had avoided before.  This label would affect our reputation, our desirability as a place to live, and land values.

He felt that hard decisions would have to be made about where to build.  The City Plan would need to be significantly amended to reflect the fact that we are on a fault line.

Like Professor Elms, David also observed that just modest strengthening of old buildings had been enough for them to survive the earthquake.

David urged the development of separate strategies for short and long-term needs.  We must make sound and considered plans for the future, but we must not allow this process to stop us taking immediate action.

The ball game has changed.  A significant realignment of our expectations and planning is required.

Professor Ian Lochhead said that there was hope for any building that was still standing.  He showed us stunning examples of monumental buildings in Europe and the Rangiatea church in Otaki that were all rebuilt from ruins.

Naturally, such reconstruction would involve significant expense and time.  Professor Lochhead argued for serious consideration of making this commitment.  He urged us to avoid “architectural Alzheimers”.  Heritage buildings are a key part of our society’s memory; we must value that memory.

Values would determine the future of these buildings.  Would we value high rental returns or our heritage?  Professor Lochhead sees the post-quake period as an opportunity to say that second-best will not do in Canterbury.  He reminded us that international heritage and tourist interests are watching.

Doug Bent of the Earthquake Commission (EQC), appraised us of the scale of the insurance challenges.  His latest figures were 52,000 claims, but he was expecting this to reach 100,000.  EQC staff would grow from 22 to 400 to handle the claims.

He had very practical advice for exposing criminals posing as EQC inspectors.  Simply ask them what claim number they are assessing.  You and the EQC inspectors will know this.  Criminals will not.

Phil Clearwater, Chrissie Williams and Jim Anderton each spoke.  They rejected the autocratic approach of the current city Mayor and administration.  They advocated a cooperative and inclusive approach to determining our city’s future.

Jim Anderton posed the question, if the government can put $10 billion into Auckland motorways, what can Christchurch expect as recovery support for a one-in-10,000 year event?